Cloud access security broker Netskope has revealed the findings of its September 2017 Cloud Report, leading with the astonishing statistic that only 24....

Cloud access security broker Netskope has revealed the findings of its September 2017 Cloud Report, leading with the astonishing statistic that only 24.6% of cloud services are rated ‘high’ in terms of GDPR readiness.

Measuring the rating on factors such as data ownership terms, encryption and data processing, Netskope found that “little progress” had been made since their June 2016 report.

The report found that 67.1% of services did not specify that the customer owns their data, whilst a more worrying statistic is that 80.4% did not support encryption at rest.

Netskope’s Threat Research Lab found that backdoors were the most commonly detected cloud malware, accounting for 27.4% of all detections, some 18.8% higher than second-placed ransomware.

Nearly 24% of malware-infected files were then shared with others, including internal or external users or publicly, with webmail accounting for 42.3% of cloud service DLP violations.

Cryptocurrency-related malware enjoyed a rise this quarter to 0.9%, with most malware related to the digital currency hosted in IaaS environments like Amazon Web Services – failing to scan documents from unsanctioned and user-led instances have contributed to the rise. 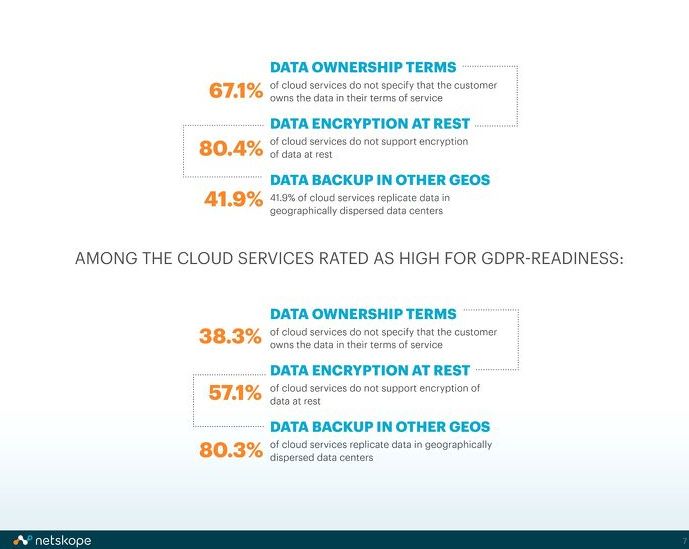 Failure to adhere to the new European Union regulations that come into force in March could see businesses hit with a maximum fine of 4% of annual turnover, or $22mn - whichever is highest.