Samsung has reclaimed its position as the world’s leading smartphone manufacturer by market share from Huawei, following an improved third quarter for the sector.

Shipments declined 1.3 per cent year-on-year for the quarter, according to preliminary data from the International Data Corporation (IDC), a significant improvement on the forecast drop of 9 per cent.

Samsung’s shipped 80.4 million smartphones for the quarter, with growth of 2.9 per cent year on year. Demand was driven by sales of sub-$250 handsets in India, the world’s second biggest market, as well as other emerging markets such as Brazil, Indonesia and Russia.

Nabila Popal, research director with IDC's Worldwide Mobile Device Trackers, said, "Although there was an element of pent-up demand that fueled market growth, it was mainly the array of heavy promotions and discounts that accelerated growth in these markets. In India, distance learning has actually boosted the demand for low-end smartphones as they are a more affordable option compared to tablets. The increased low-end demand only further increases competition and adds pressure to the vendors' bottom line."

Ryan Reith, program vice president with IDC's Worldwide Mobile Device Trackers, said, "While some of the topline numbers may not seem pretty, we are seeing a lot of improvement in the smartphone market both in terms of supply chains and consumer demand.

“In the large developed markets, it is very clear that 5G will be positioned to most consumers as their next phone regardless of which brand or price point they are focused on. Marketing has ramped up significantly. Products are widely available. Promotions are happening. And it's clear that the top sales initiative in these markets is to push 5G.

“Having said this, we still believe consumer demand for 5G is minimal at best, which only adds to the price pressure on channels and OEMs." 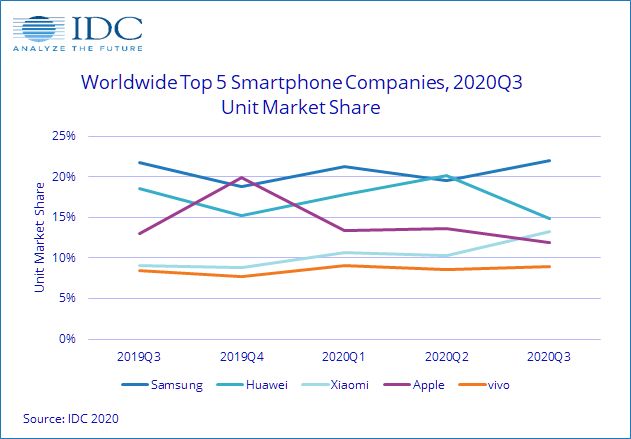 Reclaims the top spot with a market share of 22.7 per cent for the quarter. Strong demand in sub-$250 handsets in India helped, while Samsung's second largest market, the US, saw strong performance from its Note 20 and Note 20 Ultra devices.

Huawei suffered a large drop of 22 per cent year on year for the quarter with declines in international sales and at home. In China, the company’s sales dropped more than 15 per cent as it battles reputational fallout from US sanctions.

Superceding Apple in third place, Xiaomi shipped 46.5 million devices in Q3, taking 13.1 per cent market share and achieving 42 per cent growth. Demand for the company’s low-end handsets was strongest in India and China.

Dropping to fourth place for the first time, Apple’s market share for its premium (and only) devices dropped 10.6 per cent year-on-year to 41.6 million devices. The Californian company delayed the launch of its iPhone 12 and is expected to rally in Q4.

The Chinese smartphone maker is showing results in its marketing push in India, and delivered nearly 30 year-on-year growth in the country, driven by its low-end sub-$200 models. It continues to have a strong user base in China.